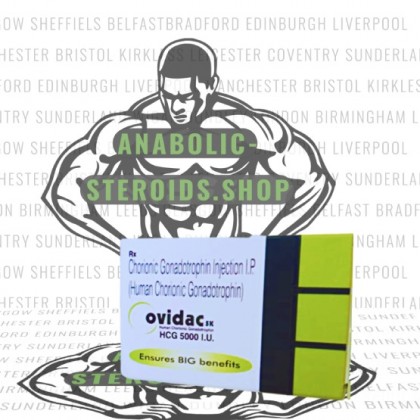 Anabolic steroids, insulin, growth hormone and thyroid hormones are all of the drugs that are now included in the arsenal of professional bodybuilders. However, this is not a complete list. For example, a few of the serious athletes neglect such a thing as gonadotropin drugs.

Chorionic gonadotropic hormone (the full name of this drug or hCG for short), is not an anabolic steroid. More precisely, it is a protein hormone that is produced in the placenta (uterus) of pregnant women. hCG is formed in the female body in the first 6-8 weeks of pregnancy and makes the subsequent production of oestrogens and progestogens possible in the corpus luteum.

As a result, the production of these hormones begins in the placenta itself. HCG enters the kidneys from the bloodstream and is then excreted in the urine. That is why it is extracted from the urine of pregnant women. Introduced from the outside, hCG facilitates the ovulation process in women, since at the time of the maturation of the egg, it comes into action and promotes its release. Also, hCG promotes the production of oestrogens and the corpus luteum.

HCG attracts the attention of bodybuilders for another reason. The fact is that this drug has almost the same qualities as the luteinizing hormone (LH), which is formed in the pituitary gland. In men, the luteinizing hormone stimulates the germ cells in the testes and increases the production of androgenic hormones (testosterone). Therefore, injectable hCG is used by athletes to boost their testosterone production and sperm count. As the dosage of steroid drugs is reduced and even more so after the full discontinuation of their use, users as a rule experience a noticeable drop in strength and muscle mass.

As a result, the luteinizing hormone begins to act with less intensity on the germ cells in which testosterone is produced. The additional intake of hCG allows you to correct the situation and raise the natural testosterone production while cycling with anabolic steroids. Moreover, once in the body, the hCG begins to work almost instantly.

HCG is generally unique due to its two-phase action. The first peak of the rise in plasma testosterone levels in the blood begins about two hours after the injection of hCG takes place and the second, after about 48-96 hours. At the same time, the average level of plasma testosterone increases and the height of the peaks and the average level depend, according to research by scientists, on the dose of hCG that is administered.

How much hCG will be required?

If we talk about how much hCG should be injected, then we can give only a rough recommendation as each individual is different and will need different dosages to counteract the strength and length of the steroids used within a cycle. For example, the notorious Bill Philips advises to take 4,000IU per week for two to three weeks. Also, most of the fitness acquaintances and bodybuilders also adhere to these numbers.

However, there are other recommendations, according to which the intake of hCG should be approached individually, based on how long the duration of the course was, the steroids that were used within the course and how high the dosages were. And if, for example, Dianabol and Sustanon were the basis of your steroid cycle, then the dosage of hCG should be higher. Another question concerns how often to inject these gonadotropin substances for.

One of the favourite English bodybuilders has the opinion in which 1,000-1,500IU of hCG will be suitable to be injected every second day. On the other hand, according to research by scientists, a single injection of hCG of about 1500IU increases the plasma testosterone level by 250-300% and this level lasts for several days (five-six). Therefore, it is possible that more infrequent injections, say every five days, would be more appropriate. For the use of hCG within beginner bodybuilders or those athletes who are looking to keep their natural testosterone production alive throughout a heavy course, 500-1,000IU twice per week will be more than sufficient for their needs. This is due to their hormones not taking as much abuse from anabolic steroids as some of the more advanced and experienced bodybuilders. So smaller dosages of hCG will be much more effective in their case.

If we talk about how long one should stay on hCG for, then here almost all sources are unanimous: no more than three-four weeks’ maximum. Otherwise, the testes will react very poorly to the hCG injections and even to their own release of luteinizing hormone, which can lead to the hypo-function of the gonads.

At the same time, the pauses between courses of gonadotropin, according to all the same Phillips, should be at least six months, although for a bodybuilder. Staying on steroids for eight to ten months, even a year in some cases, this condition is difficult to fulfil.

When to take hCG?

When should you take gonadotropic hormones? The answer to this question is also ambiguous. In the UK, the practice is widespread that hCG is injected after the end of the steroid course. It is believed that it would be more reasonable to start the hCG cycle while the steroid dosage is being reduced or completely stopped for the hCG to promote is full effects.

As soon as you start to reduce your steroid intake, the body becomes increasingly testosterone deficient. And, as a consequence, some loss of strength and muscle volume can be observed already at this stage, although the unique property of steroids is that they are anti-catabolic and even relatively small dosages are able to maintain muscle volumes and strength indicators, even with a lack of calories which is what they use, these effects will begin to discontinue as the artificial hormones start to eradicate themselves form the blood stream. This is where hCG will become most effective.

Does it make sense to conduct hCG courses in other situations? Yes, when it comes to very long steroid cycles, three months or longer. In these cases, it is very advisable to take a two-three week course and consume a good cycle of hCG to promote the testes to stay alive and not shut down (like they are told to with excess synthetic testosterone circulating the body). This will at least somewhat invigorate the sex glands. Some athletes, having finished the steroid course give themselves a small break and after three weeks, they start a new cycle of hCG to one again promote the testes to jump back into action.

A drug for all cures?

Is gonadotropin the magic substance that will help you maintain all of the results you gain from steroids? Unfortunately, no. Although hCG stimulates the testosterone production to start working, it does not affect the hypothalamus-pituitary-testicular arch and does not contribute to its restoration. As a result, injections of gonadotropins only soften and delay the collapse effect that occurs after finishing the steroid course.

That is why experienced bodybuilders calculate different combinations and try to supplement the intake of hCG with the use of drugs such as, for example, Clenbuterol and Clomiphene Citrate (Clomid). HCG cannot replace steroids when it comes to building mass and is of little used when working on muscle definition, although some athletes firmly believe that gonadotropin has a fat-burning effect and gives muscles extra firmness.

Attempts to raise testosterone levels through injections before a competition may make sense, but this comes with a certain risk, since hCG can be found on doping control test. However, despite all of the above, gonadotropins still remain extremely popular among bodybuilders when they need to keep their own hormone and testes alive while running heavy of long cycle to achieve the bodies and results they desire.