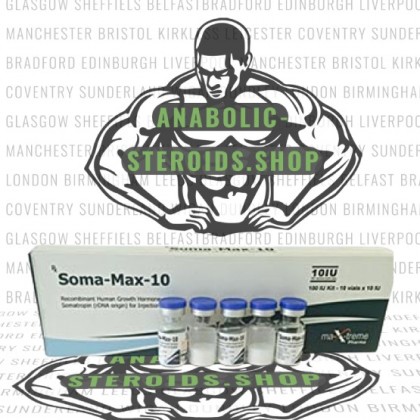 Today, the active substance of Soma-Max-10, Somatropin, is one of the most famous growth hormones. The active components of this drug stimulate the processes of intensive growth of tissues and organs. That is why the drug has gained special popularity not only in sports, but also in traditional medicine. In our online store you can easily buy Somatropin by Maxtreme Pharma at an attractive price.

Human Growth Hormone (HGH) or Somatropin is recognized as one of the best in terms of price-quality ratio. The degree of purification of the substance was 97.33% at its budget cost. Regarding the effects, athletes highlight the visible results in the following:

It is also worth noting that HGH Somatropin has an anti-catabolic effect on muscle tissue and, on the contrary, has a catabolic effect on the fat layer, which makes the substance relevant, both in drying and in a weight gaining courses.

How to use HGH

Somatropin is produced by Maxtreme Pharma in the form of a powder in 10IU vials with sterile water to be carefully mixed for injection. The dosage and duration of the course is selected individually for each athlete. Given the cumulative effect of the drug, the athlete will be able to notice the first results from taking it only after a month of continuous use.

Typically, the duration of cycle lasts from three to six months. Although, reception in therapeutic dosages will allow the athlete to extend the course for a longer time.

A common dosage of Somatropin is 5IU per day. To get a prolonged effect, experts recommend injections into the fat area or for a quick effect, inject into the muscle. If the dosage exceeds 5IU, then it is better to split it into two doses. Also, to get the maximum effect from the intake, it is best to administer the drug immediately after sleep, before eating. The second dose should be done before bedtime, after a few hours from eating.

It is recommended to store the opened vial at a temperature of +2 to +8 degrees. The opened drug must be used within two months. The shelf life of the hormone is 2 years.

Basically, at especially high dosages, after using the drug Somatropin, athletes may be at risk of manifestations of diabetes mellitus, as well as hypothyroidism. Therefore, you should not use this drug at your own discretion, and only a specialist should prescribe its dosage, depending on many individual parameters.

Athletes who have given preference to the growth hormone Soma-Max-10 note a significant positive effect. Somatropin from Maxtreme Pharma retains water in the body less than others and practically does not cause discomfort in the joints.