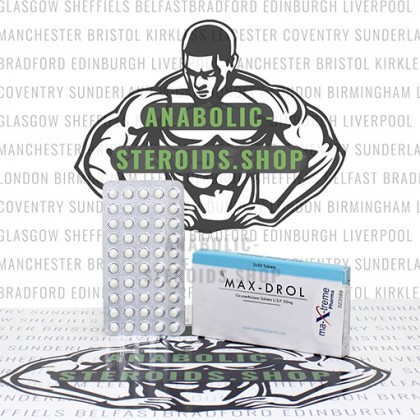 Oxymetholone is considered the second most potent tabletted steroid, Halotestin being the first. Max-Drol is an effective steroid for rapidly increasing muscle mass and strength. Being a top AAS preparation, it has some toxic effects. Max-Drol has robust anabolic activity and is often used by weightlifters in weight gain courses. The efficiency of the drug is fantastic. There are many various reviews online about this drug. It’s reasonable price and excellent results make this preparation one of the most popular anabolic steroids on the market of sports pharmacology.

Oxymetholone was first synthesized in 1960 under the brand name Anadrol. It was developed and promoted by the international company Syntex Pharmaceuticals. It was intended for the treatment of severe anaemia and osteoporosis. Its medical use ended with the discovering of the synthetic non-steroidal hormone Erythropoietin, which increases the number of red blood cells, but without negative manifestations. The production of Anadrol dropped dramatically. However, the Oxymetholone effect sparked a great deal of interest in the sports community giving it a second life.

The effect of the steroid is expressed in a rapid and powerful increase in the athlete’s weight when the muscles get bloated over a matter of time. Oxymetholone strongly inhibits and reduces the sex hormone globulin, which increases the level of free testosterone in the blood. This effect increases the growth of mass and strength. But it is worth noting that 30% of the mass is fluid, which will eventually be gone at the end of the course. This drug breaks all records of the fall-back phenomenon, so do not count on it. During a course of Max-Drol, you can gain up to 15kg of total mass, and your muscles will be looking bloated and bulky.

The critical quality of the steroid is its ability to synthesize synovial fluid in the joints so that weightlifters can increase their strength results without the risk of injury or sprains. According to numerous reviews, we can confidently say that Oxymetholone can eliminate pain and strain from the joints and ligaments. Synovial fluid acts as a lubricant, therefore, for powerlifters and weightlifters, Max-Drol is considered the best choice in the development of strength.

Doses usually depend on the athlete’s weight. The maximum dosage can be increased to 150mg per day. This dosage is suitable for athletes weighing over 100kg. For lighter athletes, 1-2 tablets (50 to 100mg) daily should be sufficient; increasing the dose will not give better results and raise the risk of undesirable side effects. To achieve maximum results, the course may last four to six weeks. Violating the recommendations may pose health risks. Max-Drol may be taken by persons over 21 years of age.

Max-Drol can be taken alone or with other anabolic steroids. Oxymetholone can be successfully combined with Nandrolone Decanoate, Testosterone, and Primobolan in a weight and strength course. Antioestrogens such as Clomid or Nolvadex should be taken during and after the course to eliminate adverse reactions. Taking HCG during the course also makes it possible to retain a significant portion of the gained mass.

You should not underestimate the likelihood of Max-Drol side effects. It can increase liver enzyme levels and is highly toxic. So it is recommended to take hepatoprotective drugs during and after the course to reduce toxicity and accelerate liver recovery. Even optimal doses can cause acne, oily skin, aggression and excessive hair growth.

Please note: If all of the recommendations are followed and not exceeded, no side effects should occur during your cycle.