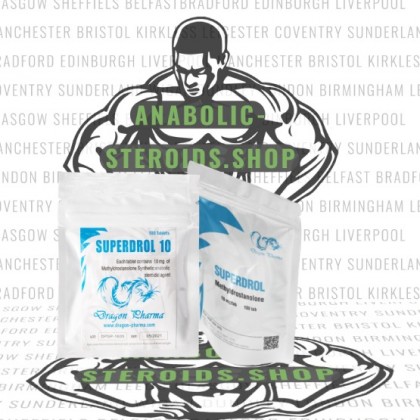 There is a very good chance that you have already heard of Superdrol, as one of the best anabolic steroids for gaining muscle mass and increasing strength. But the thing is, if you are still a little unsure that this is really the best choice for you, make sure that you learn more about this very successful and amazing steroid, that has taken the bodybuilding world by storm in the last decade. You can always buy Superdrol on our online steroid store and get free advice from our experts on how to take it correctly in courses so that you don't harm your health.

In addition to significant increases in size and mass, this dihydrotestosterone or DHT prohormone has also been seen to have the ability to increase strength levels. Based on user logs, they were able to increase their overall strength performance by as much as 20-25% in just the second week of their cycle using this compound.

Superdrol, which resembles Masteron, is superior to it in its strength and intensity. This is another type of anabolic steroid, but without the ester chain that the latter has in its chemical structure. It works by optimizing the body's ability to retain nitrogen and its protein synthesis, leading not only to increased mass, strength and endurance, but also to faster muscle recoveries after grueling workouts. In addition, its androgenic activity in the body was much lower compared to its steroid analogues. This means that Superdrol does not put you at risk for increased hair loss, hair growth or acne when you use it compared to other anabolic steroids. There is no need to use anti-estrogens when taking this compound in cycles either.

Let's start by clearing up one rather popular misconception. Superdrol is not a compound name, but a brand name that was released by Designer Supplements LLC in 2005. Interestingly, the name "Superdrol" is a play on words to give bodybuilders an idea that this is what they should be aiming for if they want fast and great results. It is supposed to be a combination of "Super" and "Anadrol" which was considered the most powerful mass builder on the market.

The half-life of Superdrol is 6-8 hours.

The active compound in Superdrol is Methasterone (IUPAC systematic name: 17β-Hydroxy-2α, 17α-dimethyl-5α-androstan-3-one), also known as Methyldrostanolone and Metasterone, which rose to superstar status while it was used on courses for fast results. It can be used on cycles to build hard and dry muscles after only a few weeks of use. Testimonials of achieving 8 to 12 kilos of muscle mass were common in athletes after courses when they used Superdrol for 6 weeks.

It is very important to take into account that Superdrol should be dosed to a minimum at the beginning of the cycle. Experienced athletes strongly recommend starting with a daily dose of 50mg per day. It is extremely important that you take Superdrol with food every time you consume this drug. Furthermore, it is possible to increase the dosage of Superdrol to 70mg in the fourth week. Proper post-cycle therapy should be taken immediately after the Superdrol course for the next 3-4 weeks to recover the body’s normal functioning. We recommend the use of Tamoxifen at 20mg per day for the 1st week and at 10 mg per day for the 2nd and 3rd week. If you are running heavy cycles and need the four week PCT, 20,20,10 and 10mg should be used over this period. We also strongly recommend the use of Milk Thistle for liver support while on the cycle of Superdrol due to its effects on the liver.

Although Superdrol was launched on the market as a "designer steroid" in 2005, its active compound, Methasterone, had already been developed in 1956 by Syntex Corporation as a component to develop a compound that had the ability to prevent tumors. In addition, with mentioning its anti-tumor properties, Methasterone was also described in a scientific article in 1959 as a "powerful oral active anabolic agent" with weak androgenic activity. Subsequently, articles about the compound emphasized that it had an oral bioavailability similar to that of methyl-testosterone and had a very high anabolic to androgenic ratio.

What are the benefits of using Superdrol?

If you are planning to use Superdrol in a course, here are the benefits you will get:

• Improved nitrogen and synthesis of proteins;

• It can be used without anti-estrogen drugs;

• It starts working quickly and effectively.

One of the best traits of this drug is the fact that it has little to zero side effects. The user does not have to worry about any estrogenic side effects such as; acne, oily skin, hair loss and so on. The only side effect that can be highlighted for most users, is its toxic effects on the liver if used at very high dosages due to being taken by oral consumption (which passes though the liver). Taking some liver care supplementation within this course can help to prevent this damage from occurring and if all of the instructions for its use are followed, no side effects should occur.