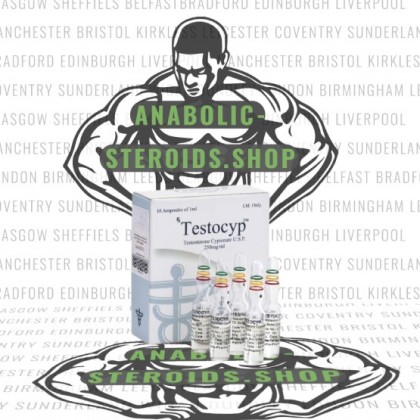 Testosterone Cypionate is a long ester of testosterone that is actively used in Europe and America. If in the countries of the former Soviet Union we see a universal demand for Testosterone Enanthate, then its analogue – Cypionate runs the show beyond the seas. That is why it is a little more difficult to buy Testosterone Cypionate in the UK, but our online store simplifies this process by allowing fast deliveries and also a selection of branded products within our online catalogue.

According to the structure, this is an ester with a long chain. Its half-life is on average 8-12 days, and the overall activity can last for half a month or more. This makes this drug one of the most convenient (rare injections and with a uniform hormonal background).

It is worth noting that testosterone in any form is excellent for gaining muscle mass, as it has the most pronounced positive effect on strength indicators and the ability to maintain the gained muscle mass. Unlike other anabolic drugs, Testocyp practically does not exert any load on the liver and does not exhaust the hormonal system. The absence of the pronounced peaks and decreases in hormone levels contributes to good health and minimizing the side effects. In general, Cypionate is a worthy competitor of Enanthate. In addition, do not forget about the attractive price of this drug.

Effects of a course of Testocyp:

• Minimal water retention in the body at low doses;

• A noticeable increase in strength indicators;

• Absence of a pronounced load on the liver;

• Improvement of mood and the appearance of a sense of cheerfulness;

• The ability to get defined muscles at the end of the course by removing the fluid from the body.

Testosterone Cypionate should be consumed according to the instructions, which are the same for all variants of testosterone. It is not recommended to exceed 500-1,000mg per week, as this will not give a special increase in the speed of recovery or muscle gain, but at the same time will increase the risk of side effects and aromatization.

If you use a solo course of Testosterone Cypionate, it is recommended to inject from 250 to 500mg per week. To maintain the level of hormones at a high level, it is necessary to administer one injection per week. This solo course can be used by both beginners and more experienced athletes.

According to numerous reviews about Testosterone Cypionate, it is recommended to combine it only with oral anabolic drugs. Combinations with Deca and other injections are best for the more advanced users. The most optimal cycle is with Dianabol, Turinabol, Winstrol, Primobolan (tablets) or Oxandrolone. The dosage for this drug remains unchanged within these cycles.

As mentioned, injections from 500 to 1,000mg per week are used by professional athletes only. We do not recommend increasing such dosages of Cypionate, as you can simply spoil the desired result due to the more pronounced aromatization issues. In most cases, 500mg per week will be more than enough even for those advanced users.

Side Effects of Testosterone Cypionate

With the improper use of Cypionate (overdoses, frequent injections, or longer durations of a cycle) it can cause aromatization, which is the conversion of male hormones into female ones, as a result of which there will be a risk of encountering gynecomastia. To prevent such side effects, auxiliary means are used, for example, Anastrozole. A cheaper option can be called Clomid and Tamoxifen, but it is better to use them only within PСT.

If you keep to the recommendations of its use, Testocyp is a safe drug. With a competent reception, you will not encounter its side effects. Follow the above dosage and everything will be fine.

PCT after a course of Testocyp

Cypionate is a long ester. Post Cycle Therapy begins only 10-15 days after the final injection. During this time, the injectable Cypionate molecules are almost completely disposed of. We recommend buying Clomid or Tamoxifen for this recovery stage. In some cases, Anastrozole may be useful within PCT also to handle any excess oestrogen levels.

If you want to restore the testicles and overall fertility faster, then start injecting Gonadotropins at 500-1,00IU per week. The average duration of the PCT is 2-4 weeks.